It’s time for The Bitcoin Standard to speculate. How might bitcoin’s status as a store of value and even as an international reserve currency evolve in the future? As the asset and the network prove their worth as a new alternative to traditional finance, the world will look at bitcoin in a new light. How will old players react when they realize the new kid’s superiority on the block?

To end the ninth chapter, Dr. Saifedean Ammous explores bitcoin’s possible role in international settlement and as a global unit of account.

Remember that The Bitcoin Standard was published in 2018. Most of what you are about to read are predictions that have come true. But first…

About the world’s coolest book club

The Bitcoinist Book Club has two different use cases:

1.- For the superstar-executive-investor on the run, we will summarize the must-have books for cryptocurrency enthusiasts. One by one. Chapter by chapter. We read them so you don’t have to, and we just give you the meaty bits.

2.- For the meditative bookworm who is here for research, we will provide cover notes to accompany your reading. After our book club finishes the book, you can always come back to brush up on concepts and find crucial quotes.

So far we have covered:

And now back to The Bitcoin Standard: “Chapter 9, Part 2: Instant Settlement”

The section begins by defining the bitcoin network as “a new independent alternative international settlement mechanism that does not rely on any intermediary and can operate entirely independently of the existing financial infrastructure”. And establishing one of the most important characteristics of the bitcoin asset, “It is much easier to move around with a bitcoin private key than with a treasure of gold, and much easier to send it across the world without having to risk it being stolen or confiscated.”

Then it’s time for the first prediction. This did not happen:

“Bitcoin can be seen as the new emerging reserve currency for online transactions, where the online equivalent of banks will issue Bitcoin-backed tokens to users while keeping their hoard of Bitcoins in cold storage, with each individual being able to audit in the intermediary’s assets in real time, and with online verification and reputation systems capable of verifying that no inflation is taking place.

Also, there doesn’t seem to be a need for another token. Bitcoin itself is sufficiently divisible. However, projects like green mint offer Bitcoin-backed tokens, so maybe Ammous is just too far ahead of the curve.

The book recognizes one of the main advantages of bitcoin, it offers instant final settlement. And the fact for large payments, “over long distances and national borders”. As a means of settlement payment, bitcoin not only competes with central banks and traditional financial institutions, “it compares favorably to them due to its verifiable record, cryptographic security, and watertightness. to third-party security vulnerabilities”.

Next, The Bitcoin Standard predicts The Lightning Network:

“The number of transactions in a Bitcoin economy may still be as large as it is today, but the settlement of those transactions will not occur on the Bitcoin ledger, whose immutability and lack of trust are far too valuable for individual consumer payments.” 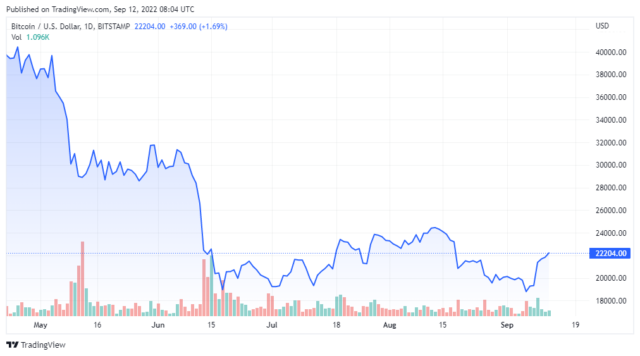 This section begins by describing a problem. When the world abandoned the gold standard, it “destroyed people’s ability to trade indirectly using only one medium of exchange.” This, in turn, has led to “the growth of a massive forex industry” which is worth billions but produces nothing of value.

The market seems ripe for bitcoin adoption, but there is a slight problem:

“The continued volatility in bitcoin’s value will prevent it from playing the role of a unit of account, at least until it reaches several multiples of its current value and the percentage of people in the world who hold and accept it.”

While using gold, the world had a monetary standard that was “independent of the control of any single government or authority”. And bitcoin promises a return to that ideal state. However, “for this possibility to materialize, Bitcoin would need to be adopted by a very large number of people around the world, most likely indirectly, through its use as a reserve currency.”

For a moment it seemed like we were close to that moment, but it was just a mirage. We are far. We are so early.

The Bitcoin Standard foresees the need for something stable

The book predicts that bitcoin will one day be “stable in value, as daily transactions in it would be marginal to the quantities held.” However, this is far from guaranteed because “monetary status is a spontaneously emerging product of human action, not a rational product of human design”. It’s not as bad as it sounds, though:

“What might appear to be better technology for the money in theory will not necessarily succeed in practice. Bitcoin’s volatility may cause monetary theorists to reject it as a monetary medium, but monetary theories cannot replace the spontaneous order that emerges in the market as a result of human actions.

As bitcoin’s adoption increases and money enters the system, “the level of its demand will become much more predictable and stable, causing the currency’s value to stabilize.” If this happens, The Bitcoin Standard portrays the possibilities as endless:

“If it achieved some sort of stability in value, Bitcoin would be superior to using national currencies for global payment settlements, as it does today, because the value of national currencies fluctuates depending on conditions. of every nation and every government, and their widespread adoption as the world’s reserve currency gives an “exorbitant privilege” to the issuing nation.”

What The Bitcoin Standard is trying to say is that, when all is said and done, bitcoin can be that global settlement neutral currency that the world desperately needs. It might even be the only option with the necessary characteristics to fulfill the role. If needed, bitcoin will be there. Validate block after block after block.